Some assembly required. The wings are included but I found it was better to attach them separately in engine so you could have their opacity increase and decrease over time. Shadow not included.

Want to see what they look like in action? Check out the free little game I made with them: https://combosmooth.itch.io/arena-knight

You can find more sprites and even some free games I've made here: https://combosmooth.itch.io/

You can use these assets for commercial or personal use. You do not have to credit me, but it would be nice.

do NOT resell these sprites.

In order to download this asset pack you must purchase it at or above the minimum price of $2 USD. You will get access to the following files:

Adapted it for my game. 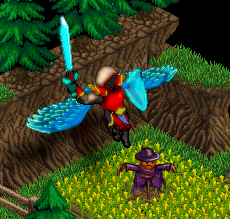 Great animation! I've purchased it. Have you thought about producing left/right variation, so it could be used with hex tilesets? Also, if you draw a lizardman archer sprite, I will buy it too ;-)

Thanks so much! I definitely want to create  more sprites in the future and lizardman is actually pretty high up on the list of what I would create.

I am not sure I understand what you mean. If you flip the sprites on the Y-axis they should work for left/right. Is there something more specific they would need to work with Hex tile sets?

Hex tiles have 6 directions: west, east, north-west, south-west, north-east, south-east. Like in original Fallout and Heroes of Might and Magic. In some cases games use north and south hexes instead of east and west, but that is a bad design decision, because you cant flip north and south sprites, and west to east movement direction is more common than north to south (i.e. beat em up games).

oh i see, because i only created them on the diagonal angles. Thanks for the info, maybe for next time!